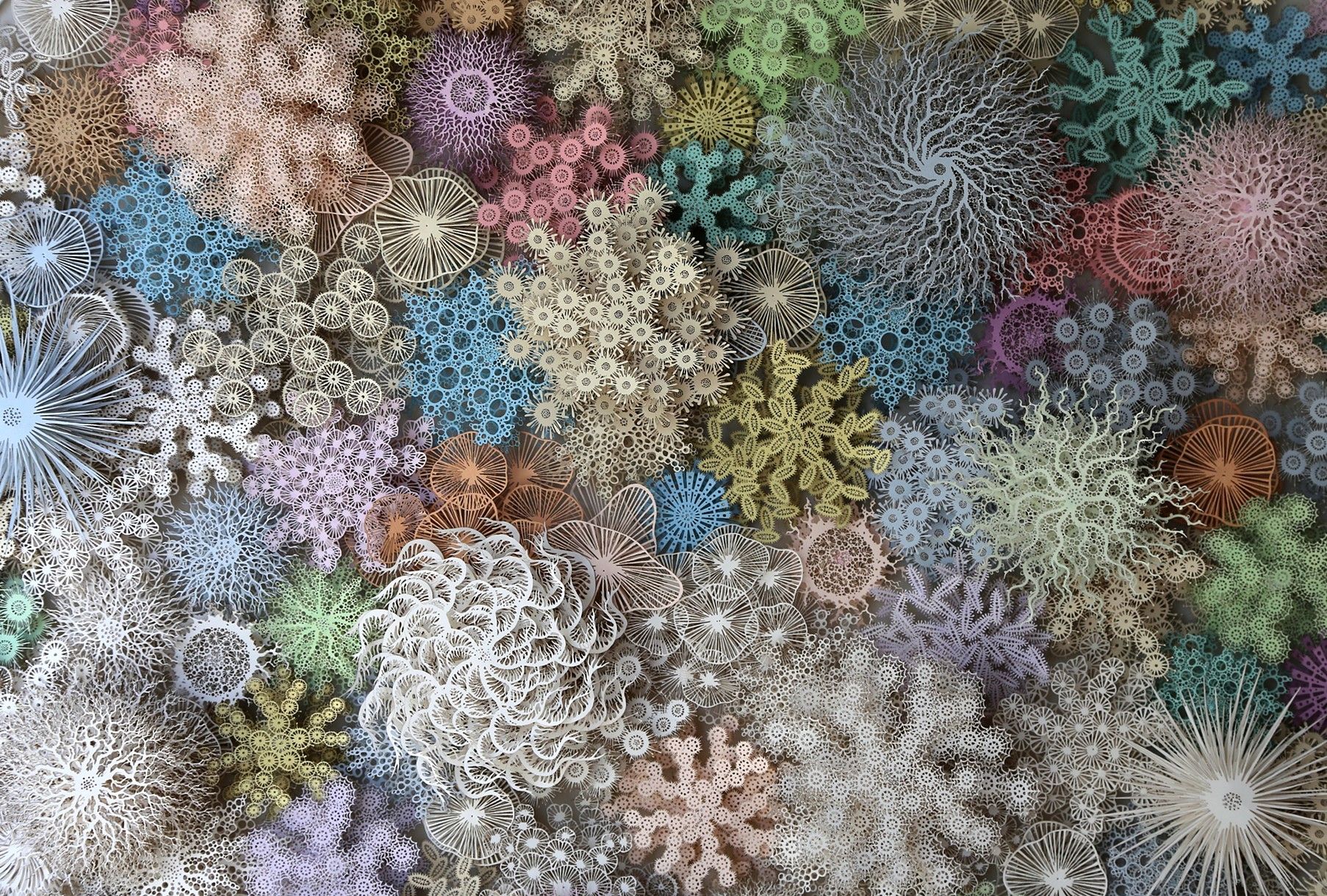 It feels like we’re doing a lot of cutting and pasting as we rearrange, reshape and edit the way we live and work. Perhaps that’s why I’ve been drawn to the work of Barbara Wildenboar and Rogan Brown, paper artists who create intricate pieces about nature, science, complexity, and scale - with just scissors and glue.

Brown writes, "A recurrent theme in my work is the limitations of science when confronted by the vast scale and complexity of nature. Science’s goal of containing and defining nature is constantly subverted and fractured by the sheer volume and variety of data that needs to be observed, analysed and classified."

Wildenboar has a gorgeous series of nervous system pieces cut from science books, which is a nice segue to newly published neuroscience research about the gut/brain connection, led by Coltan Parker. His team traced viruses from the small intestine and found they entered areas of the brain that involve cognitive and emotional function.

"With more research, we may finally begin to understand how hunger makes us ‘hangry,’ or how a stressful day becomes an irritable bowel."

Hamilton’s restaurant, Prune, was one of my favorite in New York. Her writing is even better. Last week I found myself holding my breath as I read about her business ethos and her process of figuring out what’s next.

And at a time when everyone’s trying to figure out what’s next, two pieces stand out. In January, Alex Lindsay shared broad predictions about market opportunities and challenges for the next decade that seem to be accelerating, including his thoughts on the nature of employment: Fundamentally, we need our leaders to stop trying to protect jobs and start figuring out how to build an infrastructure that supports the future of work.

Finally, Derek Thompson discusses the landscapes of cities as small businesses struggle to survive: The big will get bigger as mom-and-pops perish and shopping goes virtual. In the short term, our cities will become more boring. In the long term, they might just become interesting again.

Stay well. And don’t be shy about hitting reply with any questions, feedback or requests.

Barbara Wildenboer produces sculptures pieced together from delicately cut books, thin strips of paper splaying out from each book’s spine. Wildenboer’s found books are often ones containing maps, atlases, and scientific subject matter, sometimes using images from the book as central elements to her pieces.

Gut communicates with the entire brain through cross-talking neurons

You know that feeling in your gut? We think of it as an innate intuition that sparks deep in the belly and helps guide our actions, if we let it. It’s also a metaphor for what scientists call the ‘gut-brain axis,’ a biological reality in which the gut and its microbial inhabitants send signals to the brain, and vice versa.

In 2014 paper artist Rogan Brown completed this amazing piece he describes as an exploration “of the microbiological sublime.” Over four months in the making, the work depicts an array of interconnected sculptures—entirely hand cut from paper—based on the smallest structures found within the human body: cells, microbes, pathogens, and neurons. www.thisiscolossal.com

Science in the Romantic Imagination

Science makes us understand what we see, art makes us feel it.

Brown writes about his work in American Scientist.

At the beginning of the 19th century, the great Romantic poet William Blake gave voice to the widely held view that the way to human progress and fulfillment lies not in reason and science, but rather in the development of our ability to contemplate the small wonders of the world that surround us and that we barely notice. Blake was writing at the dawn of the Industrial Revolution, which he saw as both a desecration of the land and a destruction of the age-old, intimate, and mystical relationship between Man and Nature. It’s ironic, therefore, that it is not mysticism that has shown us the hidden world in a grain of sand, but science itself.

My Restaurant Was My Life for 20 Years. Does the World Need It Anymore?

Forced to shutter Prune, I’ve been revisiting my original dreams for it — and wondering if there will still be a place for it in the New York of the future.

On the night before I laid off all 30 of my employees, I dreamed that my two children had perished, buried alive in dirt, while I dug in the wrong place, just five feet away from where they were actually smothered. I turned and spotted the royal blue heel of my youngest’s socked foot poking out of the black soil only after it was too late.

For 10 days, everyone in my orbit had been tilting one way one hour, the other the next. Ten days of being waterboarded by the news, by tweets, by friends, by my waiters. Of being inundated by texts from fellow chefs and managers — former employees, now at the helm of their own restaurants but still eager for guidance.

Way back in January, Alex Lindsay laid out his predictions about technology-related market opportunities for the next decade. It’s an interesting read that touches on key technologies and how he thinks they’ll evolve. Some of the opportunities and issues he addresses are rapidly accelerating in the current moment: Amazon getting bigger/stronger, home delivery, movie theaters, and online education. His thoughts on the gig economy and the future of work are particularly notable.

Bringing back old-fashioned employment has about the same viability as bringing back coal. Workers are not better off with a job, they are better off with a stable process to improve their position. Most business owners know that depending on a single large client is a recipe for disaster. Their employees have not learned this lesson yet.

Echoing Lindsay’s forecast, Derek Thompson writes that the Pandemic has accelerated trends that are already underway.

This is a dire forecast, but there is a glimmer of hope. If cities become less desirable in the next few years, they will also become cheaper to live in. In time, more affordable rents could attract more interesting people, ideas, and companies. This may be the cyclical legacy of the coronavirus: suffering, tragedy, and then rebirth. The pandemic will reset our urban equilibrium and, just maybe, create a more robust and resilient American city for the 21st century.

It’s a hopeful possibility, reflective of multiple histories of neighborhoods in decline that have been reclaimed and improved by artists and scrappy business owners. However, this cycle frequently includes gentrification and a new cycle of displacement. So the question will be what have we learned that can break the cycle?